Welcome! Our Economics lessons Continue! Do have a great moment studying with us!

LESSON SUMMARY
PERIOD 1
MONOPOLY
Monopoly maybe defined as market situation where there is only one producer or supplier of a particular good or service that has no substitute. The monopolist has the power to influence the price of goods to his favour. The goods sold by a monopolist is normally differentiated.

i. Act of Parliament: This is a legal instrument by government conferring to produce or supply certain goods or services, e.g public corporations.
ii. Patent law: This law confers on a firm special privilege to protect its new invention and it tends to scare away other competitors.
iii. Level of Technology: When a firm develops high level of technology, which makes goods cheaper, this may force other competitors out of production.
iv. Effective Advertising: The success of a firm in effective advertising may force other competitors out of business.
v. Protection of public interest: Deliberate effort to protect public interest by government may confer certain monopoly on some firms, e g NEPA.
vi. Natural cause: Certain areas may enjoy the production or supply of certain goods due to natural endowment, e.g crude oil in Niger Delta.
vii. Merging of Producers: The merging of producers will make them stronger to be able to eliminate other competitors in the business.

i. Standardisation: Standardisation, which is the basis cheaper production, is better practised under monopoly.
ii. Centralised management: There is effective and proper central management under monopoly.
iii. Greater efficiency: There is greater efficiency resulting from an assemblage or pool of specialised managerial skills.
iv. It leads to invention: Monopolists, in an attempt to have full control of the market, do engage in intensive research, leading to inventions.
v. Better use of resources: Resources available to a Monopolists are better utilised to maximize business.
vi. Greater opportunity to expand operations: A greater opportunity to expand operations because the uncertainty usually associated with a state of free competition has been eliminated.

i. Danger of exploitation: Monopoly leads to exploitation of the consumers.
ii. It leads to hoarding: The desire for supernormal profit by the Monopolists may lead to restriction in output and hoarding.
iii. Decline in efficiency: Absence of competition often leads to decline in efficiency.
iv. Overproduction and waste: A monopolist may over-produce, leading to wastage.
v. Loss of freedom of choice: There is a complete loss of freedom of choice by consumers.

i. Provision of substitute products: Monopolists excel because their products have no substitute. In order to control them, there should be provision of substitute product. For example, there should be an alternative power supplier apart from NEPA (PHCN).
ii. Privatisation: Private individuals should be encouraged to take over government corporations and agencies in order to eliminate monopoly from the system.
iii. Stoppage of issuance of patent law: The stoppage of such will encourage more people to compete with the inventor so as to promote more inventions in the system.
iv. Discouraging merging of firms: Government can make laws which will discourage firms from merging.
v. Reduction of tariffs: When tariffs are reduced, more goods will be imported and this condition will help to reduce the influence of the Monopolists, as there would be favourable competition.

SIMILARITIES AND DIFFERENCES BETWEEN MONOPOLISTIC COMPETITION AND PERFECT COMPETITION
(a) Similarities
i. There is free entry and exit in both markets.
ii. There is excess or abnormal profit for both in the short run.
iii. There is a large number of firms in both.
iv. Profit is maximised when Marginal Cost is equal to Marginal Revenue.

ii. Monopolistic Competition – It has control over price or output, i.e it is a price giver

Perfect Competition – It has no control price, i.e it is a price taker

iv. Monopolistic Competition –  Price and quantity are determined by the producer or supplier

Perfect Competition – Price and quantity are determined by the interaction of the forces of demand and supply.

v. Monopolistic Competition – There is only one or single producer or supplier or firm of a particular commodity and many buyers.

Barriers That Can Prevent The Emergence Of Competitive Firms

1. High entry costs: Existing monopolies producing large volume of output may be benefiting from economies of scale. This may mean that new competitors, probably producing low volume of output, would be faced with higher per unit cost and so would not be able to compete effectively in the market.
2. Possession of rare skill knowledge: The possession of special or rare skill or knowledge by a Monopolists will make him to excel thereby making it difficult for other competitors to come into the business.
3. Legal monopolies: Certain monopolies might be created by law which will make it difficult for other competitors to come into the business, e.g. public utilities like post office or NEPA.
4. Ownership of natural resources: Sole owners of some natural resources may prevent others from coming into the business, e.g OPEC countries and crude oil.
5. Unfair Competition: Rivals may be eliminated and the entry of new competitors blocked by aggressive tactics, e.g price wars.

In a perfect market, also known as competitive market or perfect competition, the buyers or sellers cannot influence the prices of goods and services. This is because there are many buyers and sellers or firms in the market. Price and quantity are determined by the interaction of the forces of supply and demand.
Determination of equilibrium positions of a firm under perfect competition both in the short-run and long-run is discussed below.

(a) EQUILIBRIUM IN THE SHORT-RUN 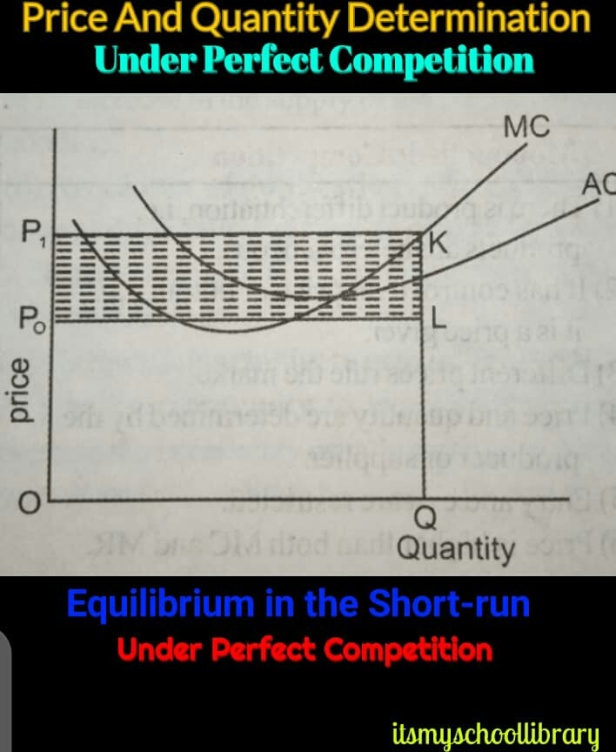 The equilibrium of a firm in a perfect competition is the most efficient operating level for the firm, where it will not have the slightest intention of leaving the industry. Under perfect competition, the profit maximisation of a firm is here Marginal Cost (MC) is equal to Marginal Revenue (MR). The Average Cost is (AC) and the price of the commodity is P. This is demonstrated in Fig 1, i.e. P = MC = MR
In the short run, the Marginal Cost cuts the Marginal Revenue at point K. The Average Cost Curve is AC, the quantity of the commodity that has been sold is OQ. The shaded area of the rectangle (PKLPo) represents the abnormal profit at the price P0P1. Here, price or average revenue is higher than the average cost of production.

(b) EQUILIBRIUM IN THE LONG-RUN

PRICE AND QUANTITY DETERMINATION UNDER MONOPOLY
In an imperfect market, also called monopolistic competition, prices of goods and services can easily be influenced by the sellers or buyers. This is due to the fact that only a single producer or supplier of a particular commodity exists even though there might be many buyers. In this case, they have full control over price or output and different prices rule the market.

Equilibrium of the Monopolist: 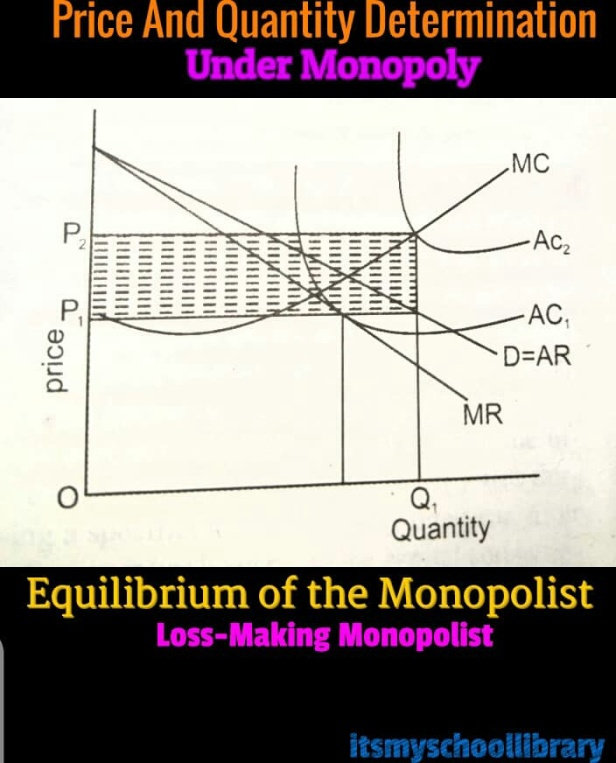 Equilibrium is the most efficient operating level for the Monopolist. In a situation where this happens, the monopolist will not have the slightest intention to quit the business since he has full control of both the price and output.
Equilibrium of the monopolist normally occurs when P > MC and MC = MR. The monopolist does not attain equilibrium by equating price (P) of the goods with Marginal Cost (MC). This is shown in table A.
From the diagram, it is observed that the profit maximising output is 0Q1. Cost of production and market price are OP1 and OP2 respectively. The Monopolist makes abnormal profit in the shaded area represented by P2RSP1. This diagram in table B explains the super normal profit of a Monopolist.
However, there are situations where a monopolist can suffer some losses. As seen in table B, the AC curves are completely outside the revenue zone. ACI indicates that the monopolist makes zero profit because its total revenue equals cost. In any case, AC indicates that when he produced and sold output of OQ2, its cost was over and above revenue. Thus, the monopolist made total loss as shown in the shaded area of the diagram.

Take a quick lesson for this lesson