Welcome! Our Biology Lessons continues. Do have a great moment studying with us.

Lesson Note
Subject: Biology
Topic: Adaptation
Lesson Objectives: At the end of the lesson, learners should be able to:

ADAPTATION
Adaptation is a change in an organism that make it to adjust or survive in its environment. The various animals of the same species try to specialize using their structure and function to survive in a new environment. This is called adaptive radiation. For instance, fish use fins to move in water but terrestrial organisms such as lizard develop limbs to move on land. Toad that live a dual life both in water and on land limbs for hopping on land. It develops web digits for swimming in water and limbs for hopping on land.

1. STRUCTURAL ADAPTATION FOR COLOURATION
Colours and colour pattern in plants and animals are adaptation which may be classified into protective colouration, warning colouration and mimicry.
a. Protective colouration: This is used in camouflage and enables the organisms to escape predation and remain unnoticed. Examples are the green cuticle of the grasshopper that allow it to blend with the grass.
Chameleon also has the ability to change its colour when frightened to remain undetected by predator.

This colour serves as a warning to potential predators to avoid such animals because of their poison or painful sting.

c. mimicry: This is the act of an organisms trying to disguise itself to be a non- living thing like dry leaf or stick (object) for the sake of survival e.g. the praying mantis which mimics dead leaf and other insects that mimics a fresh leaf. 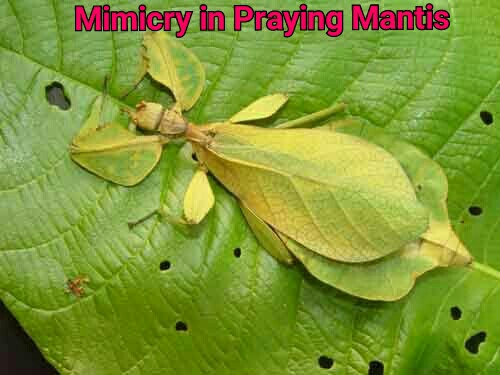 2. BEHAVIOURAL ADAPTATION BEHAVIOUR ADAPTION
This is the way an organism respond to a specific set of changes in environmental conditions. Animal exhibit many forms of behaviour in order to attend to their various needs. In order to survive harsh environmental condition, they use hibernation and aestivation.
a. Hibernation – is a period in which an organism survive long period and food shortage. Animals like bats and rodents are completely inactive during winter with their body temperature close to freezing temperature.

b. Aestivation – is a method of survival adopted by organism to survive a long period drought and heat during dry season. Animal like snail and Africa lungfish aestivate by sealing themselves up during the dry season and only return to the active state when it rains.

PERIOD 2
3. STRUCTURAL ADAPTATION FOR OBTAINING FOOD
Insects: various insect have different mouth parts. The parasites e.g mosquito and nectar suckers use their proboscis. The biting and chewing type of insects have mandibles, labrum and maxillary palps with which they bite and chew materials e.g grasshopper and cockroach
Birds: Different bird have different shape of beaks depending on their mode of feeding. Example, some carnivores among the birds have curved sharp beaks for devouring their prey. Others have long beak e.g cattle egrets with which it picks fish in water, possession of long neck as the ostrich with which it picks leaves from the trees. Chameleon sit still flicking out their tongue to catch flies.

4. STRUCTURAL ADAPTATION FOR PROTECTION AND DEFENSE

Chameleon uses photosensitive cells on its skin to fit in the environment in which it finds itself as a measure of protection from its prey.Some insects have various ways of protecting or defending themselves. Some secrete repelling odors to drive away animals intending to attack them. The bee stings in order to defend itself. Other animals withdraw to their shell to escape from predator e.g snail and tortoise. 5. STRUCTURAL ADAPTATION FOR SECURING MATEThe male peacock has beautiful feathers which it display for female so as to attract her before mating.
The red-head Agama lizard raises its head up and down to attract the hood female. Insect pollinated flowers are mostly bright coloured. 6. STRUCTURAL ADAPTATION FOR REGULATING BODY TEMPERATURE.
– ammals maintain a constant body temperature due to the presence of hairs or furs. These they use in trapping air in between pores in time of cold weather. That is why people living in temperate region tend to be more hairy than those in the tropic.
– The cold blooded animal like fishes adjust using scales to give them the required temperature.

PART OF BEHAVIORAL ADAPTATION .
–Migration : This is when the animals undertake long journey from one place to another ,some animals like birds , fishes (salmon) flee from the cold winter down to the tropics only to come back when the weather improves.
Social Animals live in groups . They are so organized that there is division of labour among them. They live in colonies or communities . The various castes differ in appearance as well as in duties. Each and everyone of them performs That is workers, soldier and queens are seen in termites. Example of social animals include termites, bees , wasps , foxes, wolves, elephant, baboons’ and humans.

Do stay connected to itsmyschoollibrary.com for more educational contents!