Welcome! Our Biology Lessons continues. Do have a great moment studying with us.

Lesson Note
Subject: Biology
Topic: Social Animals
Lesson Objectives: At the end of the lesson, learners should be able to:

Social Insects
Social insects a specialised group of insects of the same species which live together cooperatively in an organised community known as colonies. Popular examples of social insects are termites, bees, ants.

Habitat: Termites are usually found living together in large communities in nests which may be tunnels in dead wood, Chambers under the ground or anthills known as termitaria.
Castes: all the various individuals in a termite colony are grouped into three castes. These are;
A. THE REPRODUCTIVES
The reproductives are of three types. Examples are

FeaturesFunction: the major function of the king is to mate with or fertilize the queen.

Features
1. The Queen is a reproductive female individual
2. It has a small head and a small thorax
3. The abdomen is large and swollen with eggs.

4.  There is only one Queen at a time in a colony.
5.  The Queen is the largest of all the castes.
Function: the function of the Queen is to lay eggs. 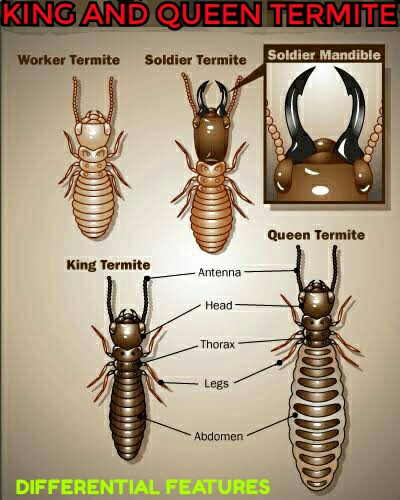 Function: they can become new Queens or Kings in a new colony after a nuptial or wedding flight.

There are two types of soldiers.

Function of the soldiers

Functions of the workers

Summary of the reproductive Life Cycle of Termites

Termite exhibits incomplete metamorphosis (eggs < nymphs < adult).
The King fertilizes the queen that lays numerous eggs. the workers take care of the eggs do they hatch into young termites called nymphs. The nymphs develop into soldiers or reproductives. The nymphs which fail to develop become the workers.
When the winged reproductive are matured, they swam out from the existing colony to build new ones. These flights is called the nuptial or wedding flight. After flying for sometimes, they fall to the ground, lose their wings, pair up, mate and reproduce in a hole they have dug. Inside the hole, the female lays eggs and becomes the queen of the new colony while the male becomes the kings. The laid eggs later hatch into winged reproductives, soldiers and workers. 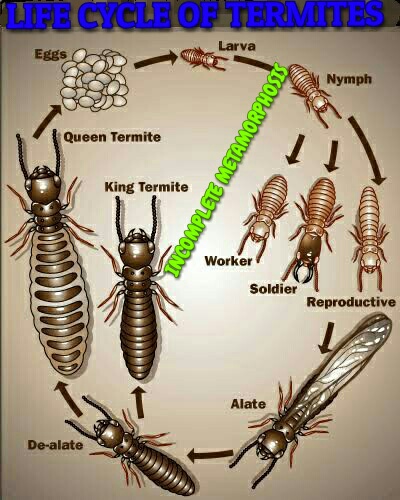 Behavioural Adaptation of Termites for Survival

1. Drone Of the Honey Bee

2. Queen of the Honey Bee

Take a quick test for this lesson!