Welcome! Our Biology Lessons Continues. Do have a great moment studying with us!

Subject: Biology
Topic: Functioning Ecosystem
Lesson Objectives: At the end of the lesson, learners should be able to:
i. Define the terms autrotrophy and heterotrophy,
ii. Recognise that food relationship exists among living things,
iii. Recognise that chemical energy (in the form of carbohydrates, fats, proteins) and nutrients are transferred among producers, consumers and decomposers,
iv. State that trophic level refers to the parts of food chain,
v. Correctly define (or describe) food chains and pyramid of energy/number,

vi. Describe the nature of energy transfer or flow in the ecosystem,

vii. State that there is a progressive diminution of energy in the feeding chain,
viii. Recognise a definite change in number of individuals from one feeding level to another, especially between producers and consumers.

Ecosystem is made up of inter independent communities of species and their interaction with their physical environment.
A single ecosystem may cover thousands of hectares or just a few. They include major natural systems such as grasslands, mangroves, coral reefs, wetlands, tropical forests and agricultural lands.
Our major focus in this lesson is on how the ecosystem functions and so other details regarding ecosystem shall be discussed in our next lesson.

The following subheadings would give us clear understanding of a functioning ecosystem.

Autotrophy: Autotrophy simply refers to the process whereby certain organisms (e.g green plants) use sunlight or chemicals to manufacture their food from inorganic substances through a process called photosynthesis.

Heterotrophy: Heterotrophy refers to the process or situation where certain organisms such as animals cannot manufacture their own food but depends directly or indirectly on plants for their food.
Autotrophs, Heterotrophs, Consumers and Decomposers
Autotrophs are organisms (green plants and some bacteria) which can use sunlight or chemicals to manufacture their food from inorganic substances during the process of photosynthesis. In other words, autotrophs are organisms capable of synthesizing their own food, hence they are called producers.

Definition of Producer
Producer can be defined as green plant or autotrophs which traps the energy of sunlight, radiant energy or solar energy and converts it to chemical energy in order to form organic compounds and photosynthesis using CO2 and water or simple inorganic substances as raw materials. It forms the starting point or origin of every food chain.
Autotrophs provide food for the other organisms in the habitat. Terrestial examples of autotrophs are grasses, trees and shrubs while aquatic autotrophs are phytoplankton, water hyacinths and sea weeds.

Definition of consumer
This is an organism which derived its nutrients, energy and food from eating plants directly or indirectly. In other words, it is an organism which depends on other organisms for food, energy and nutrients. All consumers are heterotrophs and they lack chlorophyll. They are either animals that derive their nutrients, food and energy from eating plants directly (e.g cow and sheep) and are called herbivores or primary consumers or they are other animals (e.g cats, Hyena’s, lions and leopards) that eat herbivores and thus derive energy indirectly from the producers. These are called carnivores or secondary consumers.
Consumers are heterotrophs that feed on other organisms. They include all holozoic organisms such as herbivores, carnivores, omnivores, Decomposers and parasites. Some examples of consumers or heterotrophs in a terrestial ecosystem are caterpillar, cow, dog, lion, toad, hawk, lizard, man, etc while aquatic heterotrophs include water fleas, tadpoles, larvae of Insects and fishes. 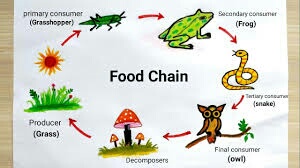 Every food chain usually begins with a producer (green plant) that is feed on by a herbivores (primary consumer) which is in turn fed by a carnivore e.g toad and the canivores is again fed on by snake and the snake is fed on by a bigger carnivore such as hawk. Example of a food chain in aquatic habitat is: Diatoms, mosquito larvae, Tilapia fish, whales.
(Producer) (primary consumer) (secondary consumer) (tertiary consumer).
During the process which occurs in food chain, food energy is transferred from one organisms to another in a linear form. The hyphens shows the direction in which the food is being transferred, even though most food chains begin with producers. There are few exemptions that start with dead plants or animals. For example, Humus – earthworm – domestic fowl – man – etc.

Food web
Food web is defined as a complex feeling relationship among organisms in the same environment with two or more inter-called food chains.
Food web contains two or more food chains and therefore more organisms than food chains and therefore more organisms than food chain. In nature, the interaction in feeding are more complicated because a single plant could be fed upon by more than one or two organisms. When a consumer feeds on different types of plants or animals in a food web, it has a better chance of survival in its ecosystem. 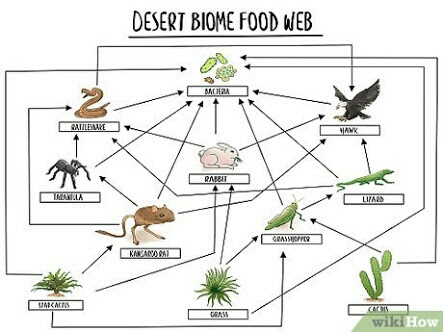 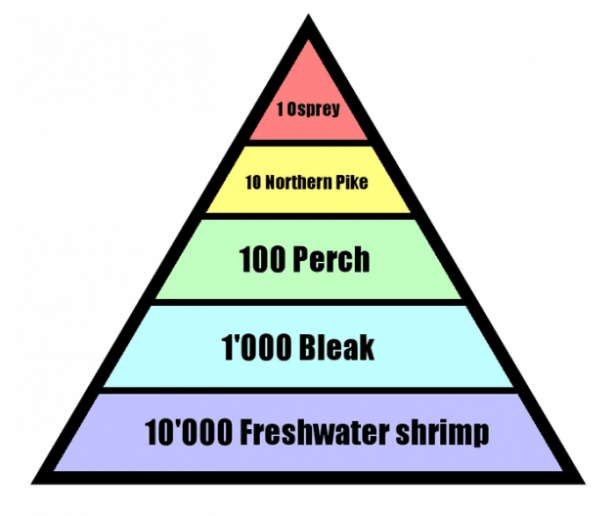 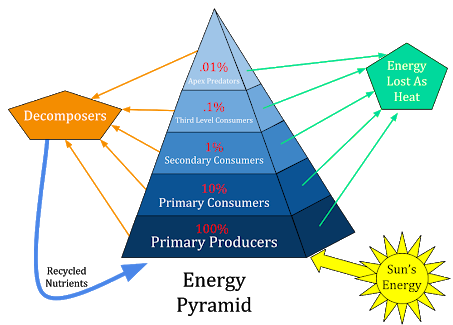 The Principles
i. Food chain starts with photosynthesis (producers) and ends with decay.
ii. Shorter food chains are made more efficient than larger food chains in terms of waste of energy.
iii. Large population are characterised by more steps in food chain. This means that useful energy decreases so that little of it will be made available to the tertiary consumers.

What Are The Components of an Ecosystem?

(a) Biotic Components: This biotic components include the living things ( plants and animals) which can be grouped into producers , consumers and decomposers.
(i) Producers: Producers are autotrophs (green plants and some micro- organisms) which can manufacture their own food from simple inorganic materials during the process of photosynthesis and chemosynthesis.
(ii) Consumers; Consumers are the heterotrophs ( animals and some plants) which cannot manufacture their own food but depend on plants directly or indirectly for their food. They may be primary , secondary or tertiary consumers.

(iii) Decomposers: Decomposers are bacteria and some fungi which break down plants and animals in order to feed on them and in the process, nutrients are released to the soil for use by the producers.

(B) Abiotic Components: The abiotic components of an ecosystem are the non- living things which include.
(i) climax factors like temperature, wind,humidity, sunlight and rainfall,
(ii) inorganic materials and nutrients such as carbon (IV) oxide, oxygen, nitrogen, calcium and phosphorus.
(iii) edaphic factors like soils, rocks, topography
(iv) other factors like dust, storm, fire and water.

Components Of An Ecosystem

Interactions Among the Components Of Ecosystem

There is a unique interaction among the various components of an ecosystem. In an ecosystem the biotic factors are non-living things (carbon) dioxide , oxygen, sunlight, soil and water etc) while the biotic components are plants and animals, Green plants use carbon (iv) oxide .water and chlorophyIi in the presence of sunlight to produce carbonhydrate or starch. Animals feed on these carbonhydrates or plants and release carbon (iv) oxide for plants to take in Micro- organisms and other decomposers breakdown dead plants and other organisms to release nutrients to the soil. These nutrients are absorbed by plants for use in food production plant gives out oxygen during photosynthesis which is used by animals for their normal respiration.

The local biotic communities in nigeria can be grouped into two major zones. These are

(a) Forest zone: The forest zone is made up of vegetation having mainly trees and consist of the following local biotic communities.
(i) Mangrove swamp forest ( salt and fresh water swamp (ii) Tropical Rain forest
(B) Savanna zone : The savanna zone is made up of mainly grasses and is further sub-divided into three savanna belts or biotic communities which are Southern guinea savanna, Northern Guinea savanna and salted savanna.

Location; The mangrove swamp forest is found in areas along the coast especially in states like Delta, Cross river , Rivers, Akwa ibom, Bayelsa, Ogun and Lagos.

(i) it has tall woody trees
(ii) plants mainly have arid roots
(iii) it has evergreen trees with broad leaves
(iv) it has high rainfall of over 250cm throughout the year which results in water logging
(V) its water is a combination of fresh and salt water
(vi) Common plant species found are white mangrove, red mangrove , raffa palm, coconut etc
(Vii) Animals found in the biotic community include tilapia fish, oysters, crabs, snakes, birds, and kingfishers

Characteristics of Tropical Rainforest
(i) The vegetation has tall trees with butress roots and evergreen leaves
(ii) The trees exist in different heights or layers, i.e, bottom or lower, middle and upper layers.
(iii) The biome expression high rainfall of over 200cm , high temperature and high relative humidity
(iv) Plant species include Iroko, Obeche, Mahogamy, African walnut, Opepe and Ebony
(v) Animals commonly found include monkeys, birds, snakes, chameleon and squired
(vi) The trees are scattered and deciduous, i.e they shed their leaves during the dry season
(Vii) it has tall grasses.

Location: This biotic community is found in some states in Nigeria such as Enugu, Kogi, Benue, Kwara, Oyo, Ebonyi, Osun, and Ekiti

(iii) it has tall grasses
(iv) it has tall trees with broad leaves
(v) The trees are scattered and decidious , i.e, they shed their leaves during the dry season
(vi) Important trees include the locust bean trees, shea butter and Isobelina
(vii) Important animals commonly found in the biome include anticlopes, lions, leopards, and zebra

Location: This biome is found in states like Plateau, Kaduna, Bauchi, Niger, Taraba, Adamawa and Kano.

(ii) It has scattered and short deciduous trees
(iii) it has short but numerous grasses
(iv)Some of the trees have thorns while others have thick barks.
(V) Some of the trees wither in dry season and sprout at the beginning of the rain season.
(vi) Common plant species found include acacia, date palm, silk cotton plants and baobab
(vii) Common animals include snakes, lizards, deer, lions, leopards and antelopes.

Location; The local biotic community is found only in the extreme northern parts of nigeria such as Bornu, Katsina, Sokoto, Yobe, Kebbi, Zamfara, Kano, and Jigawa

(i) The biome has high temperature and very low rainfall (below 50cm per annum)
(ii) It has short and scanty grasses.
(iii) It also has short and tough shrubs or trees
(iv) Grasses are fewer, poorer and in patches
(v) it has many drought – resistant and shattered plants.
(vi) Important plant species include acacia, gum, arabic and date palm.

Characteristics of trees and shrub of the Savanna

(a) The trees and shrubs are scattered and woody
(b) They have narrow leaves and few stomata
(c) Their leaves have thick cuticle
(d) The trees are not usually very tall(10-50meters)
(e) They have gnarled, twisted or crooked trunks with fissured, fire- resistant or corky barks.

Location: This biome is located at the northern borders of Sokoto, Katsina, Jigawa, Yobe, and Bornu states.

(i) A desert has little or no rainfall in most of the year.
(ii) it has high temperature and very low humidity
(iii) it has fewer grasses and shrubs
(iv) The plants have special features which enable there to live in desert , e.g absence of leaves, swollen and succulent stems, and long roots
(v) Common examples of trees are baobab and the cacti trees.

Ways By Which Animals In Arid Habitat are Adapted to the Drought and High Temperature are;

Take a quick test for this lesson

Do stay connected to itsmyschoollibrary.com for more educational contents