Welcome! In our Economics class today, we will be looking at the theory of demand. Do have a great moment studying with us!

Subject: Economics
Topic: Theory of Demand
Learning Objectives: At the end of the lesson, learners should be able to;

Demand may be defined as the ability and willingness to buy a specific quantity of goods and services at a given price and at a particular period of time.
In economics, demand is quite different from want or need. Want or need refers to a mere desire for a commodity but not backed up by the willingness and ability to pay for it.
In order to differentiate demand from need or want, economists usually talk about effective demand. Effective demand is defined as a desire backed up by ability and willingness to pay for specific quantities of a commodity at alternative prices and within a period of time. If Mr. Bayo has the money to purchase a brand new car and is able to pay for it, then he has the effective demand for the car. Bayo therefore demands the car. But if Mr. Okorodudu on the other hand desires to have a motorcycle and he does not have money and therefore unwilling to pay for it, he merely wants or needs the motorcycle and has no effective demand for it.
In summary, when a consumer’s demand is backed-up by the necessary ability and willingness to pay, it is said to be effective demand. But if the consumer does not have the means (money) to buy the commodity, it means he merely wants or needs or desires the commodity.

The law of demand states that all things being equal, the higher the price, the lower the quantity of goods that will be demanded, or the lower the price, the higher the quantity of goods that will be demanded.
This law is often regarded as the first law of demand and suppy. It simply means that when the price of a commodity like yam, for instance,.is high in the market, very few quantities of it will be demanded by the consumer and vice versa.
All things being equal, this law will hold under the following assumptions:
i. That there will be no change in taste and preference of the consumer.
ii. That the consumers’ income remains constant.
iii. That no very close substitutes of a commodity exist.
iv. That the habits of consumers remain unchanged.
v. That there is no cheaper in the quality of the product.
Demand Schedule
Demand schedule can be defined as a table showing the relationship between prices and the quantity of that commodity demanded. In other words, a demand schedule is a table which shows the different quantities of a commodity that would be bought at various prices, at a particular time.
There are two types of demand schedule namely;
i. Individual demand schedule: This is a table which shows the different quantities of a commodity which an individual (or a consumer) would purchase at various prices and at a particular time. Let us consider a trader, Mr. Kayode, who has purchased several tins of milk at various prices as shown below: 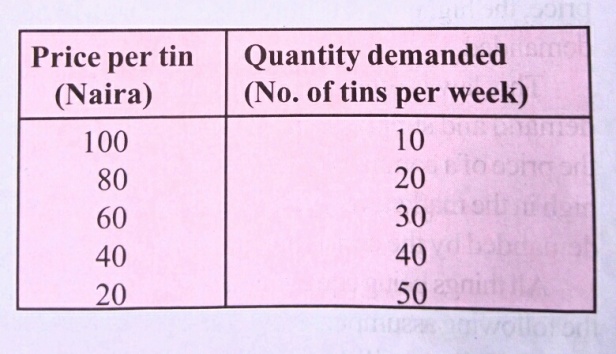 In the above market demand schedule, it is measured that there are only five consumers of milk. The table also reveals the relationship between the different prices of milk and the total quantity which will be purchased by all the consumers at each price, every week. The table is also in consonance with the law of demand.

1. Derived demand: Derived demand is the type of demand occurs as a result of demand for other commodities. The demand for one commodity will necessitate the demand for another commodity. For example, flour and sugar are demanded because there is demand for bread. Labour is demanded to construct the highway because there is a demand for good roads. So, labour, flour and sugar are “derived” demand commodities.
2. Joint or Complementary demand: Joint demand is a demand , which occurs when two commodities that are related to each other are demanded at the same time. These two commodities are said to be complementary to each other as a change in the demand for one commodity will bring about a similar change in the demand for the other. Examples of joint demand are bread and butter, tea and milk, can and petrol. Sometimes they are described as “joint demand goods”.
3. Competitive demand: When two commodities are fairly close substitutes to each other, they are in competitive demand. In other words, they serve the same purpose or perform a similar function such that an increase in the demand for one will result in a fall in the demand for the other. Examples of commodities that are close substitutes are Bournvita and Ovaltine, Malta Guinness and Maltina; Omo and Elephant detergents; Butter and Margarine; etc. If the price of any of these pairs of commodities is high, the consumers may switch over to the other close substitute which has a lower price.
4. Composite demand: Demand is said to be composite when a commodity is required to serve two or more purposes. For example, sugar is widely used in the home for beverages as well as in industries for making pastries and confectionery. If the industrial demand for sugar suddenly increases, it will affect the quantity of sugar demanded in the home. 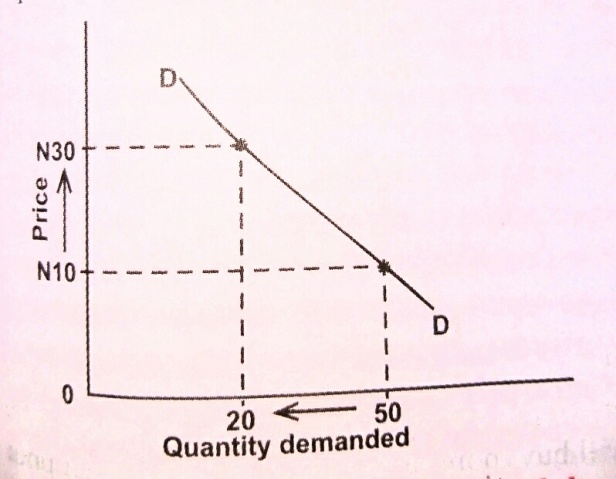 Fig 4: Decrease in the quantity demanded

In the figure above, an increase in the price of the commodity from #10 to #30 brought about a decrease in the quantity purchased from 50 to 20 units.

Shift of Change in Demand 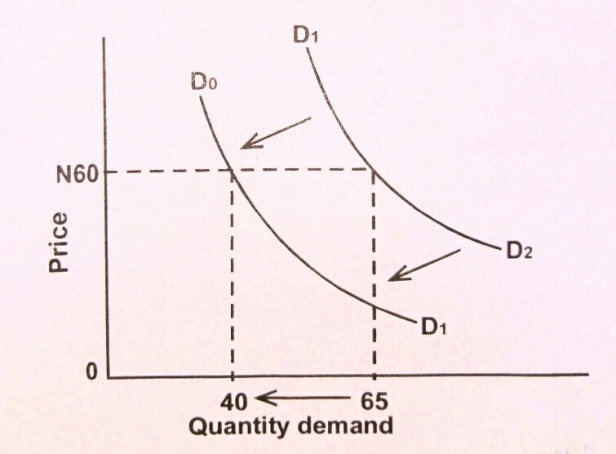 i. Articles of ostentation: These are goods which command or have prestige value, e.g golden wrist watches, jewellery, luxury cars, etc. Some consumers take pride in buying goods whose prices are high because the higher the price, the higher it is valued and so the greater the quantity demanded.
ii. Articles of necessity: These are also referred to as “inferior or griffin goods”. These are articles or commodities which are considered essential to the extent that people cannot do without them. Examples are garri, salt etc. The low income earners prefer sacrificing other items at the expense of these ones. Thus, the higher the price of these commodities, the higher will be the demand for them.
iii. Future expectation: If people expect price of certain commodities to rise in future, they will buy more of them but if they expect price to fall, they will buy less of such commodities.
iv. Rare commodities: Some consumers have the tendency to buy certain rare and unique commodities at higher prices. These commodities are special, rare and not easily affordable as a result of the high value attached to them, e.g antique furniture. The higher the value of these items, the higher their demand.

The concept of the law of diminishing marginal utility can be used to explain the slope of the normal demand curve. The higher the marginal utility derived from the good, the higher consumers are willing to pay for it. The rational consumer aims at maximising utility from the use of his resources. To achieve this, the consumer ensures that marginal utility (MU) of a good is equal to the price (P) of the good.

Note: Figure 8 and 9 below represent marginal utility and demand curves. 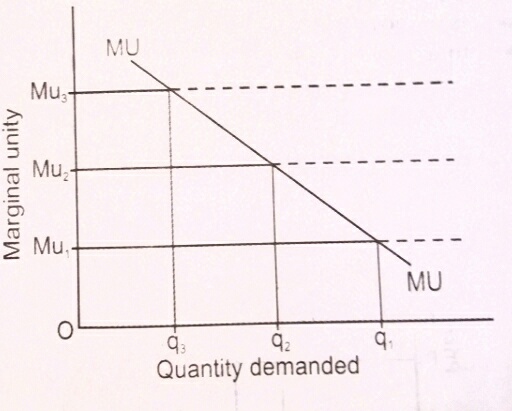 However, MU diminishes as increasing quantities of a commodity are consumed. Therefore, as the MU of a commodity diminishes, a consumer’s willingness to pay diminishes. This inverse relationship between the quantity demanded of a commodity and its price referred to as the law of demand.
Both MU and demand curve slopes downwards from left to right. From the diagram in fig 8 above, the higher the MU derived from a commodity, the higher the price the consumer will be willing to pay for it, hence when MU is high (e.g MU3 at q3), a consumer will be ready to pay P3 for q3. However, when MU diminishes as increasing quantities of goods are consumed (e.g from q3 to q2), willingness to pay diminishes (e.g from P2 to P1). This inverse relationship between the quantities demanded of a good and its prices is referred to as the law of demand while the inverse relationship between MU and quantities consumed is referred to as the law of diminishing marginal utility.
A reduction in price will encourage a consumer to consume a commodity whose marginal utility has fallen, hence marginal utility of a commodity must be equal to the price of the commodity (MUx = Px).

Take a quick test for this lesson!