Welcome Esteemed Scholar! Our literature lessons continues, do have a great moment studying with us!

Subject: Literature In English
Topic: Summary Analysis of the poem “The Dining Table” by Gbanabom Hallowell.
Lesson Objectives: This lesson is aimed at helping learners understand the poem The Dining Table”. So by the end of the lesson, the learners should be able to:

The Dining Table is a poem written by Elvis Gbanabom Hallowell, a Sierra Leonean poet and journalist. Gbanabom Hallowell studied Writing at Vermont College of Union & Institute University, USA and he is currently the Director-General of The Sierra Leone Broadcasting Service.
A prolific author and human rights activist, Gbanabom is the author of Drumbeats of War (poem) and My Immigrant Blood (poem).
The background of the poem can be traced to the 11-year civil war of Sierra Leone (1991 – 2002).
The war was very fierce that the poet scornfully refers to it as the gathering at the “dinning table” where compatriots literally feed on each other, rather than on food. 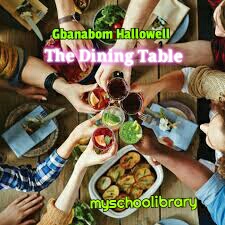 The poem is a celebration of violence which saw brother bent on decimating brother until the ECOWAS monitoring group called ECOMOG, led by Nigeria, put out the flames of self-destruction.
It should be noted that it is not only Sierra Leone that has experienced war in Africa: Nigeria, Angola, Algeria, Burundi, Congo DR, Ethiopia, Eritrea, Liberia, Somalia, Cote d’Ivoire, Sudan, etc,have had theirs in turn.
Thus, ‘blood’ has become an important image whenever Africa is mentioned in the comity of Nations. In the poem, ‘blood’ is in itself a trope (metaphor) as the poet speaks of “vegetable/blood” and “gun wounds” or what he calls “the split milk of the moon.
The title of the poem suggests that the battle takes place in the East and Northeast area of Sierra Leone where there is a table-land (plateau) of between 1000ft – 2000ft high.

Dinner tonight comes with
gun wounds. Our desert
tongues lick the vegetable
blood – the pepper
strong enough to push scorpions
up our heads. Guests
look into the oceans of bowls
as vegetables die on their tongues.

The table
that gathers us is an island where guerrillas
walk the land while crocodiles
surf. Children from Alphabeta with empty palms dine
with us; switchblades in their eyes,
silence in their voices. When the playground
is emptied of children’s toys
who needs roadblocks? When the hour
to drink from the cup of life ticks,
cholera breaks its spell on cracked lips.

Under the spilt
milk of the moon, I promise
to be a revolutionary, but my Nile, even
without tributaries comes lazy
upon its own Nile. On this
night reserved for lovers of fire, I’m
full with the catch of gun wounds, and my boots
have suddenly become too reluctant to walk me.

The Dining Table is a short narrative poem that recollects the turbulent events of the Sierra Leonean civil war in the 1990s.

The setting is the West African country, Sierra Leone represented by the dining table.

The dinner, the prime bone of contention in this ruthless war, is the country’s mineral wealth – diamonds.

The time setting is obviously in the night, a period of darkness.

The persona vividly recounts what it was like to live through this time of brutal conflict marked by vicious atrocities.

• Militias sympathetic to the government – crocodiles – are equally guilty of many war crimes.

• Everywhere there is blood and mayhem – maiming, killing, and destruction of property.

• Children and other vulnerable segments of the Sierra Leonean society are caught up in the conflict. They have no choice but to become either perpetrators or victims of the evils of war.

• The state of insecurity and disorder is so pervasive that it is impossible for the state to prevent or control diseases such as cholera. As a result, many perish unnecessarily.

• It is a time that death stares everyone in the face – even if you are lucky to survive the bullet, diseases such as cholera may not spare you.

who needs roadblocks? When the hour
to drink from the cup of life ticks,

Despite the persona’s resolve to rise from the ashes of war and become an agent of social change – a revolutionary – he is so weighed down by the traumatic effects of the conflict and rendered helpless by the reality of social dysfunction that he can hardly do much.

… I promise
to be a revolutionary, but my Nile, even
without tributaries comes lazy
upon its own Nile. On this
night reserved for lovers of fire, I’m
full with the catch of gun wounds, and my boots
have suddenly become too reluctant to walk me.

The themes in The Dining Table

The Dining Table is meant to warn Africans of the traumatic experiences that await them if they allow their countries to descend into civil strife.

• Patriotism or concern for one’s nation even in difficult times

The poet’s serious tone and his repetitive use of the first person singular pronoun – I, me, my – in the last stanza depict his love and loyalty to his native land. He pledges to work to bring his troubled motherland back to normal in spite of the daunting challenges that clearly lie ahead.

Also, the poet may as well be calling on his compatriots to rise up to the challenge to rebuild their broken nation.

• The resource curse that has bedevilled many African countries

It is paradoxical that while Africa is blessed with vast amounts of mineral wealth such as gold, copper and diamond, these have rather become the source of underdevelopment across the continent.

The people of the continent of Africa continue to suffer disease, famine and hunger mainly due to brutal conflicts, like the Sierra Leonean civil war, brought by the struggle among greedy leaders to have control over these resources.

Poetic techniques or literary devices used in The Dining Table

The poet is able to present to us images of war and the horrifying effects of war through an appropriate choice of words.

The following are some examples of diction that create visual images of war and conflict in The Dining Table.

Images of gloom and doom

The poet uses repetition to evoke the kind of gloomy atmosphere that characterizes a period of chaos in any society. This is a time of violence and darkness.

It is clear that the persona is terribly concerned about the dangers vulnerable groups like children are exposed to when civil conflict breaks out.

Dietary imagery/Food imagery: This is evoked in the following words.

Here are other literary devices the poet employs in The Dining Table to convey his themes to the reader.

• The table
that gathers us is an island where guerrillas
walk the land while crocodiles
surf.

From the title of the poem, the reader initially gets the impression that they are about to be treated to a sumptuous meal of poetry. This hope is quickly dashed in the ironic twist of the very first line:

The reader is shocked to learn that on this dining table, the only delicacies are blood diamonds – vegetables and pepper tainted by the horrific atrocities of war. And the guests? Blood-thirsty crocodiles and war-hungry guerrillas!

• silence in their voices

• switchblades in their eyes,
silence in their voices.

• dinner: “Dinner” is used to stand for the mineral wealth of Sierra Leone, specifically diamonds.

• table: “Table” in the poem stands for the country, Sierra Leone.

• the table that gathers us is an island

• the oceans of bowls

• where crocodiles surf: This evokes a frightening image of lawless government militias visiting acts of barbarism on the defenceless civilian population they are supposed to protect. The situational irony here cannot be lost on the reader.

“spilt milk” shows the poet’s realization that the country is in a state of near hopelessness.

However, the reference to the “moon” in this period of darkness suggests the changing mood of the poet.

The feeling of despair that characterizes the previous stanzas is giving way to one of hope. This is clearly in spite of the overwhelming state of despondency into which the country has fallen.

The poet appears to believe that all hope is not lost. There is a glimmer of hope. This is why the poet declares his readiness to become a revolutionary – to defy the odds in order to begin a process towards change.

See literature Past Questions and answers for 2020/2021 WAEC

Education, Population And The Society

5 thoughts on “The Dining Table by Gbanabom Hallowell: Summary Analysis.”